Tor is, yet again, producing some data that seems to defy explanation.  Having talked a lot about how the number of unique .onion addresses has varied in recent weeks (and was apparently settling down) another metric has suddenly shown a dramatic change.  The amount of data being reported as using the hidden services has plummeted (and I use that word deliberately). 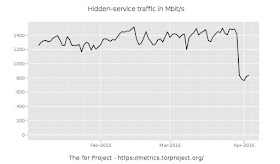 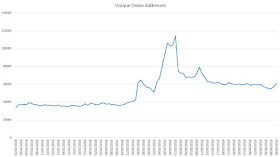 The question then occurs as to whether the overall traffic on Tor has seen a similar fall.  The short answer is no:

So we have another mystery.  Hidden services traffic has dropped with no drop in the number of .onion addresses and no suggestion that Tor as a whole is being deserted.

If anyone has any ideas I'd love to hear them - see me on Twitter at @profwoodward.


UPDATE 09/04/2016: The volume of data traffic to hidden serbices continues to fall and is now less than 50% of what it was only a week ago: 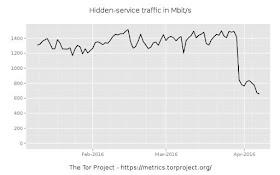