How Much Of Tor Is Used For Illegal Purposes?

A paper just published by researchers at Kings College attempts to quantify how much of Tor is used for illegal purposes.  Or rather, what proportion of Tor's hidden services are used for illicit purposes.

The scans returned a total of 5,205 live websites within the hidden services network, out of which 2,723 were conducting one of the following activities:


These results were reported with what was termed a "high degree of confidence".  Where sites were categorised as "None" it was because there was no content (hence counted neither as illegal or legal in nature), and "Unknown" means it was not possible to determine the nature of the content.

The definitions used by these researchers for illegal activities are: 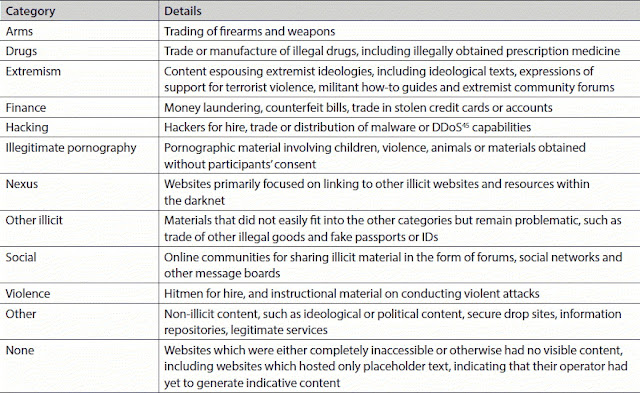 The first thought about this data is that it appears to have found only 5205 Onion sites whereas Tor report many more .Onion unique addresses:

Interestingly, Tor reports approximately 35,000 unique .Onion addresses.  But the researchers report approximately 300,000 addresses having been detected, representing 205,000 unique pages (individual sites obviously comprise many pages).  This suggests that the researchers' analysis does cover a statistically significant proportion of the hidden services in operation.

Hence, the conclusion, which seems to be statistically valid, means that at least 57% of "active" sites were involved in illegal activities.

Whilst many headlines have reported this as being the majority of Tor is used for illegal purposes, it needs to be remembered that this also means that 43% is being used for legal purposes.  57% is a relatively small majority.

The Tor Project themselves wrote a report last year attempting to extrapolate the level of Tor usage that was dedicated to visiting hidden services.  It is this method that resulted in their figures shown above.  They note that at least 1% of the Tor nodes need to be reporting such statistics for it to be reliable.  However, the number of such nodes has been steadily increasing so the figures reported by the Tor Project appear to be valid:


Using the data provided by the Tor Project you can compare the total bandwidth within the Tor network with how much bandwidth is being used for hidden services: