As someone who is a unusual mixture of physicist, engineer, statistician and computer scientist, I have long known the value of being able to visualise your data.  As computing power and data storage capacities have increased there has been a tendency to suffer from data overload.  Consequently, being able to dynamically manipulate large data sets and use that data to create visual representations, can lead to insights that would simply not result from poring over the raw data.

Florence Nightingale (yes that Florence Nightingale) was one of the first to use graphical representations to demonstrate publicly the poor conditions being suffered in the Crimea by British soldiers.  And, we've all seen bar charts, spider diagrams and so on.  But such simple tools have long since ceased to enable us to visualise the volumes and types of data that modern science needs to analyse.  Enter the Allosphere.

The Allopshere was created back in 2008.  However, increasing experience of how to use it, and advances in the supercomputers that do the hard work, has meant that the Allopshere is now enabling analysis of physical phenomenon that are truly remarkable, and rather beautiful to watch. 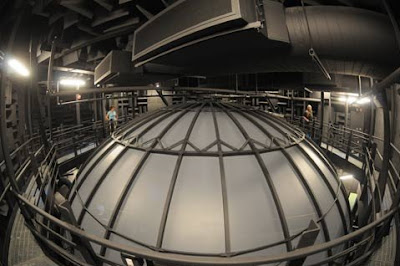 So, what is the Allosphere?  The most obvious feature is the huge sphere within which images can be projected.  Not surprisingly it can be in 3D, but most importantly you can immerse yourself within your data, your equations or the images you have taken.
It looks like something out of a science fiction movie, and can accommodate upwards of 30 researchers who can stand together, deep within representations of their data, manipulate it using wireless joysticks, and together consider what the data is telling them: 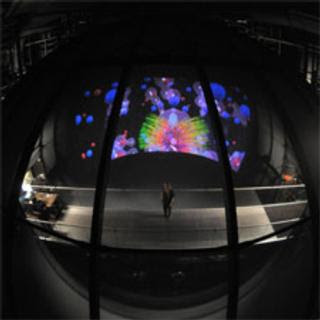 Of course, none of this would be possible without the computing power that lies, unseen, in its air-conditioned hall.  The processing power that has been assembled is really impressive.  More impressive still is the way in which that has been combined to produce an "supercomputer".  The key is the algorithms and the software to implement them, without which the supercomputer would be a very expensive heating system.  Those at the Allopshere have been developing some, frankly, inspired pieces of software.  And, they don't keep it all to themselves.  They regularly contribute to Open Source projects, which I would encourage you to go visit.  These include:

So, what does all of that add up to?  Well, it has now reached the point where you can walk through the nano-scale world and view data representing the multimodal quantum mechaincs at work: I strongly encourage anyone to listen to Professor JoAnn Kuchera-Morin (Director of the Allopshere) in the TED talk she gave two years ago.  I, for one, hope she does another very soon.
Posted by Alan Woodward at 21:46
Email ThisBlogThis!Share to TwitterShare to FacebookShare to Pinterest
Labels: Data visualisation
Newer Post Older Post Home